Apriltsi is a small town, settled at the foot of the Middle Stara planina mountain. Its population is about 4 700 inhabitants. It is located at the distance of 180 km. to the east of Sofia, at the distance of 57 km. to the west of Gabrovo and at the distance of about 25 km. to the south east of Troyan. The town is young at age, small at inhabitants, but with rich history and incredible with its nature and with its landmarks. The most charming thing in Apriltsi is nature. The combination of the hospitality of the local people, of the coziness of the hotels and the rest-houses, and of the beauty of the mountain nature leave incredible memories to the town’s guests. Here is the kingdom of the rocks. Inaccessible and steep rocks rise from all sides of the mountain.

Apriltsi offers something for every visitor. To keen mountaineers – the challenges of the peaks Botev, Maragidik, Triglav; to risk-lovers – the Northern Djendem and the Vidimsko praskalo waterfall, to anglers and mushroom-gatherers – a full basket, any time, near the Vidimska and Ostreshka rivers and in the damp mixed forests; to hunters-precious trophies, to contemplators – breathtaking and diverse mountain sights in all directions, plus the only bed of Alpine rose in Stara planina.

In 1812 there was opened the first monastery school, and in 1850 – the first secular school in the village. In 1872 Levski found a secret revolutionary committee there. The freedom-loving mountain dwellers took part in the April Uprising (1876). In 1976 in honor of the 100-annual jubilee from the April Uprising the four villages – Novo selo, Vidima, Zla reka and Ostrec merged in and the today’s town of Apriltsi was established.

There are regular bus lines to Troyan, Sevlievo, Gabrovo, Lovech and to the smaller towns.

The town is a starting point for many tourist routes to beautiful places in the region.

It comprises parts of central Stara Planina and is exceptionally picturesque, offering a wonderful coexistence of splendid nature, fresh air, an abundance of mineral springs with healing qualities and a multitude of well preserved local traditions. The features of the region offer the best of opportunities for mountain, ecological and spa tourism.

The town of Troyan is situated on the picturesque terraced banks of Beli Ossam River. Its Museum of Traditional Arts and Crafts boasts a collection of fine artifacts. Every year a National Fair of Traditional Crafts takes place in the nearby village of Oreshak. The famous Troyanski Monastery can be found at about 10 km from the town of Troyan. 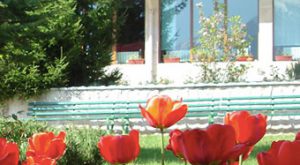